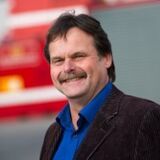 Methanol, a substance for the future

At room temperature methanol is a colorless and volatile liquid. Its formula, CH₃OH, shows that methanol is one of the simplest alcohols. As opposed to ethanol, the alcohol used to produce alcoholic beverages, methanol is highly toxic.

Methanol is primarily used in the chemical industry. Due to its simplicity this alcohol is a commonly used raw material for many different applications. Combined with other raw materials methanol can be converted into, for example, acetic acid and formaldehyde, a substance that plays an important role in various industries. In addition, methanol is used for the production of biodiesel.

How is methanol formed?

Methanol is naturally formed through fermentation of pentoses (sugars containing five carbon atoms). However, it is also possible to synthetically produce methanol from other chemical substances or from coal, biomass and natural gas. When using natural gas, the methanol is formed during a reaction involving steam, for which methane is most commonly used. With the right treatment, involving hydrogen gas, this hydrocarbon can be converted into methanol and water. After filtering the water and possibly other byproducts, pure methanol remains.

Methods to make the methanol extraction process more sustainable are currently being looked into. Past research in this field includes trying to use sunlight in the process and trying to obtain the raw materials for methanol from air. As soon as this is applicable at a large scale it will be possible to produce methanol sustainably. It is also possible to obtain methanol from residual materials from other chemical substances, which could be an important step during the transition towards a more circular economy.

Methanol can be used for a variety of applications. It is an excellent solvent and forms the basis for many chemical processes. A small amount of methanol is added to spiritus to ensure ethanol as a fuel can be excluded from the excise duties on consumer alcohol. This makes spiritus unsuitable for human consumption, and as such no excise duties have to be added to its price. An emetic is added to prevent methanol poisoning in those who attempt to drink it regardless. Methanol poisoning occurs frequently, as methanol can emerge during improper preparation of consumer alcohol.

More important is the fact that methanol can be used as fuel, in its pure form or blended with other types of fuel. Methanol is often preferable to hydrogen, seeing as transporting and storing methanol is easier and safer. However, a disadvantage of methanol is that it is less volatile than hydrogen and combusts at lower temperatures, which makes it harder to start an engine when it’s cold. The amount of energy released during the combustion of methanol is also smaller than the amount released from hydrogen, meaning one would need a larger amount of methanol to achieve the same results.

Another large disadvantage is that the engine will wear out faster, because the combustion of methanol results in various acidic byproducts, which damage the engine. This can be prevented by adding neutralizing agents or by applying a coating to the engine that will prevent this damage.

Already methanol is occasionally used as fuel in maritime transport, even though this does require modifying the engine first. One of the most important benefits of methanol in comparison to regular fuels is that its emissions of fine particulate, sulfur and NOx are considerably lower. This is because methanol combusts more completely than, for example, gas oil. The possibilities of using methanol in combustion engines are being further investigated. China in particular is focusing on this. Here methanol is already blended into fuels offered to private individuals, whom can choose between 5, 10, 15, 85 or 100% methanol.

Methanol as a renewable energy source can contribute to achieving climate objectives, since methanol can be obtained from biomass. When methanol is obtained from organic waste it can be considered a sustainable energy source too. Methanol plays an important role in the production of biodiesel, another biofuel obtained from biomass. However, biomass requires chemical treatment with methanol or ethanol in order to be converted into biodiesel. As such, methanol is an important link within the energy transition.

The usability of methanol as a primary fuel is being researched as well. Considering the speed at which we are running out of fossil energy sources it is crucial to investigate alternatives, such as renewable methanol, also called biomethanol. Biomethanol is obtained from biogas released in biodigesters. This method results in hydrogen, which can be converted into methanol through CO₂ injections, which means all raw materials in this chain are put to good use.

Methanol can already be converted into electricity in fuel cells. This takes place in a Direct Methanol Fuel Cell (DMFC). At the moment this process is not yet very efficient, which makes methanol fuel cells, even if combined with electric engines, unsuitable as a replacement for fuel engines. However, DMFCs are already suitable for smaller vehicles and applications with a low energy demand. A large advantage of DMFCs is that they can store large amounts of energy in a relatively small space. However, the water the DMFC uses to generate the energy is constantly recycled and due to the energy lost during the CO₂ removal DMFCs are not very efficient.

For years Bredenoord has been focusing on researching sustainable alternatives to fossil fuel and new ways to reduce emission. We are fully exploring the possibilities of methanol as well. Would you like to know what we are doing in this field or are you interested in a collaboration? Feel free to contact us.