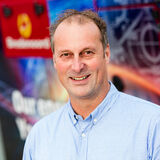 Biofuel, a solution during the energy transition

Nowadays more than 90% of our energy is obtained through the burning of fossil fuels, such as crude oil, natural gas and coal, which emits high amounts of CO₂. The burning of coal alone is responsible for 41% of the global CO₂ emission. In addition, the available amount of fossil fuel is decreasing. Obtaining oil is becoming relatively more expensive, as most of the easily obtainable oil has already been used. To meet both the growing demand for fuel and the goal to use sustainable energy sources as often as possible instead, attention is shifting towards biofuels.

As of 2020 at least 10% of all fuels used in the European Union for transport must be alternative fuels, such as biofuels. Biofuel is a collective term for fuel obtained from organic material that has been converted into synthetic fuel, such as diesel. These biofuels can be used in standard combustion engines and thereby serve as an alternative fuel for vehicles. A small part of the fuels currently used in vehicles already consist of biofuels.

The percentage of biofuels mixed into regular fuels is increased slightly every year. Regular petrol contains a maximum of 5% bioethanol. This amount of ethanol can be processed by all cars without first requiring engine modifications. Many newer cars can process a higher percentage of bioethanol, for which the fuel E10 is available. E10 contains between 7.5 and 10% bioethanol. As of October 1st 2019 petrol stations are required to offer E10 at half of their fuel pumps or more.

Which biofuels can be used for gensets?

Almost all of Bredenoord’s gensets run on diesel. The benefit of diesel in comparison to gas is that transporting a diesel tank is considerably easier and less dangerous than transporting a gas tank. In addition, biofuel can be blended into traditional fuels more easily than most other biofuels. For this reason this article focuses on biodiesels and won’t elaborate any further on biogas and bioethanol.

Many synthetic biodiesels have such similar characteristics to regular diesel that it is unnecessary to modify the engine. Two well known biodiesels are FAME and HVO, two fuels that each have their advantages and disadvantages. Generally FAME is blended into fuels intended for private individuals. Bredenoord, however, prefers using HVO.

Fame stands for fatty acid methyl esters. During a process called transesterification, vegetable or animal oils are converted into fatty acids that can serve as fuel. FAME is cheaper to produce than HVO. However, FAME attracts water, which stimulates the growth of bacteria, which in turn pollutes the engine. In situations where fuel is stored long-term, such as in the tank of a backup generator, this may cause problems. As such, especially when using FAME, it would be advisable to perform a fuel analysis at least once per year.

HVO stands for hydrotreated vegetable oils. HVO is produced by gasifying biomass and then converting this gas into a liquid. This process results in a fuel that is considerably cleaner than regular diesel, since HVO barely contains aromatics and sulfur particles. In addition the combustion of HVO results in a lower emission of NOx and fine particulates. HVO is more expensive to produce than FAME, but it repels water and is both cleaner and of better quality. Because of these reasons the only biofuel Bredenoord offers is HVO.

When discussing renewable fuels GTL is often mentioned as well. GTL, however, is a synthetic diesel obtained from natural gas and therefore not a biofuel. Its production process is similar to that of HVO and in characteristics GTL is nearly identical to regular diesel, although it is considerably cleaner due to its lack of sulfur particles and aromatics. To date it is not mandatory to blend biofuels into GTL, which eliminates the tank pollution problem posed by some other biofuels. The energy density of GTL is lower in comparison to regular diesel, which makes GTL less efficient. In addition, when measuring from well-to-wheel, the CO₂ emission of GTL is slightly higher, while the CO₂ emission of biodiesel is lower.

With biofuel the distinction is made between first and second generation. First generation biofuels are made of crops grown specifically for this purpose. Often these are grown in tropical countries, on soil that could have been used to grow food. Rainforests are often burnt down to meet the high demand for farming grounds. Not only does this release the CO₂ stored within the trees, this can also have negative consequences for the biodiversity within this region.

Advantages and disadvantages of biofuel

As evidenced in this article the use of biofuels instead of fossil fuels comes with both advantages and disadvantages. These are summarised below. Benefits of biofuels include:

However, there are various disadvantages too, including:

Bredenoord offers regular diesel, the synthetic diesel GTL and the biodiesel HVO (second generation). The diesel that best suits your project depends on various factors. Are you in need of advise in making the best decision? Our experts will gladly help you. Please contact us for a non-committal advise.