Large-scale energy storage is now also available for temporary projects at virtually any location. Bredenoord launched the Big Battery Box at DNV GL's site: the first mobile energy storage for large capacities. The system has a 600 kWh capacity and can charge and discharge within an hour. Thanks to its unique, patented structure and construction, the Big Battery Box is the first large battery that can be moved safely and quickly. The system is now available for rent and can be used directly for construction sites, fast charging stations, events and grid takeovers.

The Big Battery Box is an autonomous, easily transportable 20ft container filled with Li-ion batteries, power electronics and climate control. It can store energy from solar and wind farms and can be charged by the grid or generators. The system supplies power with zero noise and CO2 emissions. Big Battery Boxes are easy to hook up and can generate several MWs of capacity in next to no time. Margien Storm van Leeuwen, New Business Manager at Bredenoord: “The system is very suitable for peak shaving; it dispenses power during brief periods of high demand, for example when a tower crane is temporarily put into operation at a construction site. The Big Battery Box can also serve as a backup in places where installation of the grid connection has been delayed; an all too common occurrence in recent times.

To see this video, the marketing cookies will have to be accepted.

Manage my cookies Or watch the video on youtube.com

Bredenoord has been working on sustainable mobile power solutions for almost a decade based on its Clear Concept philosophy. Margien Storm van Leeuwen: “The Big Battery Box is an important step in energy transition, as flexible energy storage is now also available in large capacities, allowing construction projects and events with high power demand to use renewable energy sources, such as solar and wind, with absolute power security when and where they need it. This also makes existing generators more sustainable, as they only kick in when the battery is depleted. An added advantage that results in significant reductions in fuel consumption and CO2 emissions. With our first buffering product, the smaller ESaver, we were able to cut diesel fuel consumption by half a million litres in five years. The Big Battery Box will allow us to take even bigger steps towards 100% sustainable mobile power.”

Testing in a smart grid
The first Big Battery Box was put into operation on 15 June during a field test by DNV GL for ENGIE and Bredenoord. 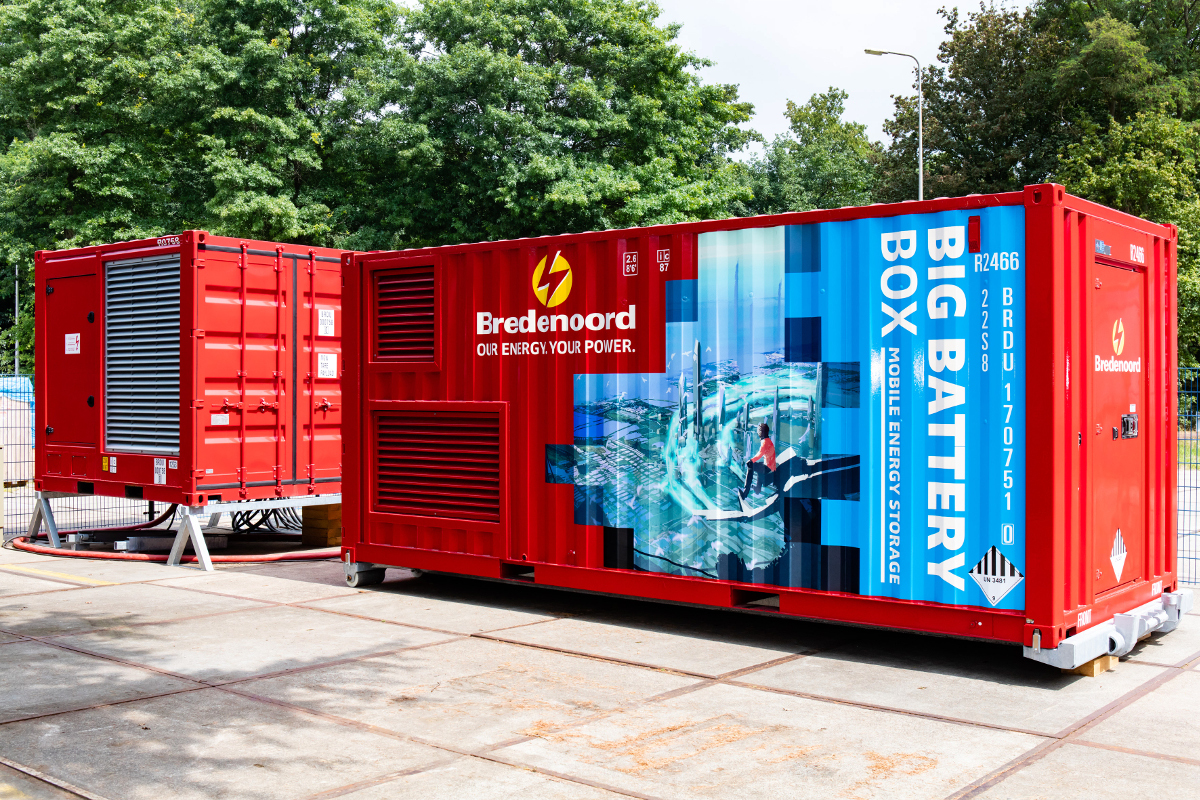 It was hooked up to DNV GL's Flex Power Grid Lab, which simulates the situation in a smart grid and can therefore determine the performance and reliability of the Big Battery Box in practice. DNV GL’s tests provide users maximum assurance about the performance of the mobile battery, even under non-ideal conditions. Theo Bosma, Director, Power & Renewables DNV GL - Group Technology & Research: “For DNV GL, this is a great opportunity to test the battery against the GRIDSTOR recommended practice. In addition, the Big Battery Box will also be used for peak shaving for the KEMA laboratories, which will reduce the labs' maximum power peak and, possibly, our costs.”

Cooperation on energy demand
The current energy transition phase involves not only a transition from fossil fuels to renewable sources, but also a move towards increasingly decentralised energy generation by private entities, organisations and co-ops. To keep the power demand constant, these actors will need to cooperate closely with each other. For example, in emergency power pools and Frequency Containment Reserve, assisting grid operators in keeping the electricity grid stable. To that end, ENGIE has developed the FLINT platform, where battery owners and others can make their capacity available. Guido Frenken, Managing Director, ENGIE Ventures & Integrated Solutions: "Maintaining balance is essential to ensuring stable power supply in the Netherlands. At present, that role is generally filled by large power plants. Allowing the many different and often small decentralised sustainable resources to take over this role requires a new form of cooperation. With the ENGIE FLINT module, we enable cooperation among the local resources across the country and connect them to one virtual power supply system that can meet the peaks and troughs of supply and demand.”