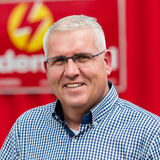 If you need power at a location without a power outlet, then it is of the utmost importance that the generator will always do what it is supposed to be doing. For example if you work offshore. For a large shipbuilder in the offshore industry bredenoord tests the power installations on board of five so-called pipe-laying vessels

These types of ships are used to lay pipes in the vicinity of drilling rigs. A rather precise job, for which it is mandatory that the ship navigates to an exact right position and subsequently holds that same position. Therefore, before new ships become operational, all installations are extensively tested. The generators are connected to a ‘load bank’ that simulates the situation at sea. Bredenoord rents out these load banks. Bredenoord account manager Rogier Houtman: “The advantage of a load bank is that you can customize exactly what you want to test: producing the maximum capacity, a specific capacity during a short period, etc. We can in fact simulate all possible scenarios. In this case we do it on a ship, but such a set-up is also very suitable for stress tests in for example data centres.”

Percise preparation
Per ship such a test takes two weeks. During the first week the testing equipment is fine-tuned, and during the second week the official testing takes place, in the presence of the inspection bodies. However, the entire process starts much earlier. “It is a certified set-up,” explains Houtman, “and therefore the equipment and the method of reporting must comply with stringent rules. Together with the customer we discuss an extensive schedule of requirements and advise on the best possible set-up. During the testing phase one of us is always present to operate the load banks, thus allowing the customer to fully focus on his own equipment and expertise. By now the first tests have been completed to full satisfaction.”