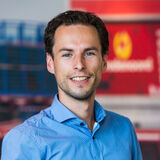 For PK Waterbouw we developed a multifunctional new system that perfectly suited their needs.

In crowded cities such as Amsterdam, where usually lots of construction projects take place, it can be quite a challenge to transport the required materials and machines. Over 30% of the traffic on Amsterdam’s overloaded road network consists of vehicles related to construction work, which cause air pollution, traffic disruption and sometimes even damage to the roads and quays. However, shutting down construction projects is not an option, and so the quest for alternatives began. PK Waterbouw found a solution in one of the most characteristic features of the Dutch capital: the canals.

PK Waterbouw transports construction materials through the city via the water, using unique material designed for the task and experienced personnel. Transporting via the water instead of the roads provides many advantages when it comes to nuisance. The city is a lot quieter when the amount of trucks driving through is reduced. In addition, the canal roads and quay walls don’t wear out as fast when heavy traffic is reduced.

PK Waterbouw also assists during projects such as piling, dredging work, scaffolding and riverbank protection. Their equipment for this includes 80 pontoons, which are taken to the right place by 20 tugboats and pusher crafts. These boats are currently running on HVO biodiesel, but PK Waterbouw wants to change that. Because, explains Bart Verweijen, Business Developer at PK Waterbouw, the municipality of Amsterdam wants this kind of work to be completely emission free by 2024. An ambitious goal that is aimed at both the road and the canals. “Therefore we applied for a DKTI subsidy at the RVO, so that we could develop a hydrogen-fueled electrical solution.”

In the past PK Waterbouw has worked on the development of electrical vessels before. “We then faced the issue of having to take boats out of rotation during the process, which costs us a lot of money. We face the same issue during maintenance work carried out by other parties. As such it is important to us to be 100% certain that every new boat is constructed very well and also easy to maintain. Bredenoord has fully specialized in the generation and distribution of power, so we knew they were the right partner for this project.”

Zef Jansen, Account Manager at Bredenoord, has been closely involved since the start of the development process. “For us this is a great new approach,” Jansen says. “Together with PK Waterbouw we developed a solution that perfectly fits the unique circumstances of working on the canals. After several brainstorming sessions and the following development process we found the solution: a modular mobile battery pack that can be connected to a hydrogen-powered range extender or even more battery packs, at DC level. This solution powers the propulsion system of the pusher craft. As a general rule each pusher craft will use two battery packs. In addition the system is equipped with a shore application, which also allows multiple battery packs to be connected. We proceeded to build this solution for two pusher crafts.”

The energy solution also includes a hydrogen-fueled range extender. This range extender is based on a PEM Fuel cell that ensures the batteries are constantly charged with a set amount of power, to increase the vessel’s range. The H2 range extender can be used for both the pusher crafts and the shore application.

During the development process Bredenoord collaborated closely with Electrauvision and in2E for developing the required software.

After a development process of approximately three quarters of a year the components could be ordered and the systems were actually put together. This year the first pilots started, during which the system also undergoes the mandatory inspection required by inland navigation law. PK Waterbouw brought this knowledge to the project. “Something remarkable about this project is that the full propulsion system must meet the demands of the Dutch Shipping Inspectorate, where enormous containers are usually the norm,” Verweijen explains. “On large vessels at sea or the rivers this is fine, but we are using small city vessels. Each square centimeter had to be used optimally. Bredenoord did an excellent job at that. Another great advantage of the new battery pack is that it can deliver a large starting power straight away. We usually needed a genset to do this, but now we can do this with a battery, without needing a large container for it.”

Future maintenance work has been kept in mind as well. “With earlier custom made projects all parts were concealed into the boat, which was not at all practical. During maintenance work nothing could be reached easily. The new boats are designed to allow easy access to all important parts. We can easily remove the battery pack, place it on the shore and repair it or carry out maintenance work. Of course we arranged a service contract with Bredenoord right away,” Verweijen says.

The essential future developmental steps have been accelerated, thanks to the trust PK Waterbouw placed in this project. “For now we developed this system for two boats,” Jansen says. “In addition, we made plans with PK Waterbouw to electrify more pusher crafts in the future. This year Bredenoord once again invested significantly in energy storage systems for our own rental fleet. At the same time we create custom systems for clients whenever we can, of which this project is an example. By now we have worked with energy storage for over a decade and acquired a lot of experience in the field. Both our Technical Training Center (TTC) and our Service departments now possess a solid base of knowledge and experience, which allows us to provide the right aftercare in both fields.”